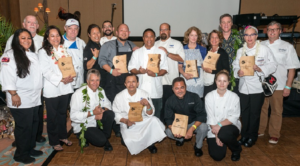 Culinary entries from Maui and the Big Isle were tapped winners at last night’s Big Island Chocolate Festival gala. A sold-out crowd of 600 attendees sprawled inside and out of the Hapuna Beach Prince Hotel.

Chefs, chocolatiers and college students were critiqued on taste, texture, appearance and creativity by a team of celebrity judges at competitions during the two-day festival.

“Students performed at a really high level and we’re hoping to have more participation throughout the UH culinary programs next year,” said Teresa “Cheech” Shurilla, program coordinator for UH-Maui College. “We want to make it viable for all the schools to come and compete.”

The real winners of the fifth annual festival are two beneficiaries: the ACF Kona Kohala Chefs Assn./University of Hawai‘i endowment fund for the culinary program at Hawai‘i Community College-Palamanui and programs at Kona Pacific Public Charter School in Kealakekua.

In addition to last night’s gala, the festival offered a full lineup of chocolate decadence from planting to plating: a Kona cacao farm tour, plus growing and processing seminars and how-to culinary demonstrations by chocolate industry experts.